Inside: Our special needs kids are almost always told what they won’t be able to do, won’t be able to accomplish like their typically developing peers. But when they go and prove their doctors wrong, it’s the biggest milestone they’ll have.

These are the words I heard 5 minutes after I was given my daughter’s diagnosis clinging to her in a cold, sterile doctor’s office.

She couldn’t see me, they told me. She may never see me. And she will be dependent on me for life. Then they threw around words I had never heard of before. And a few I had. Possible cancerous tumors.

It’s an awful list to hear with your child in your arms. 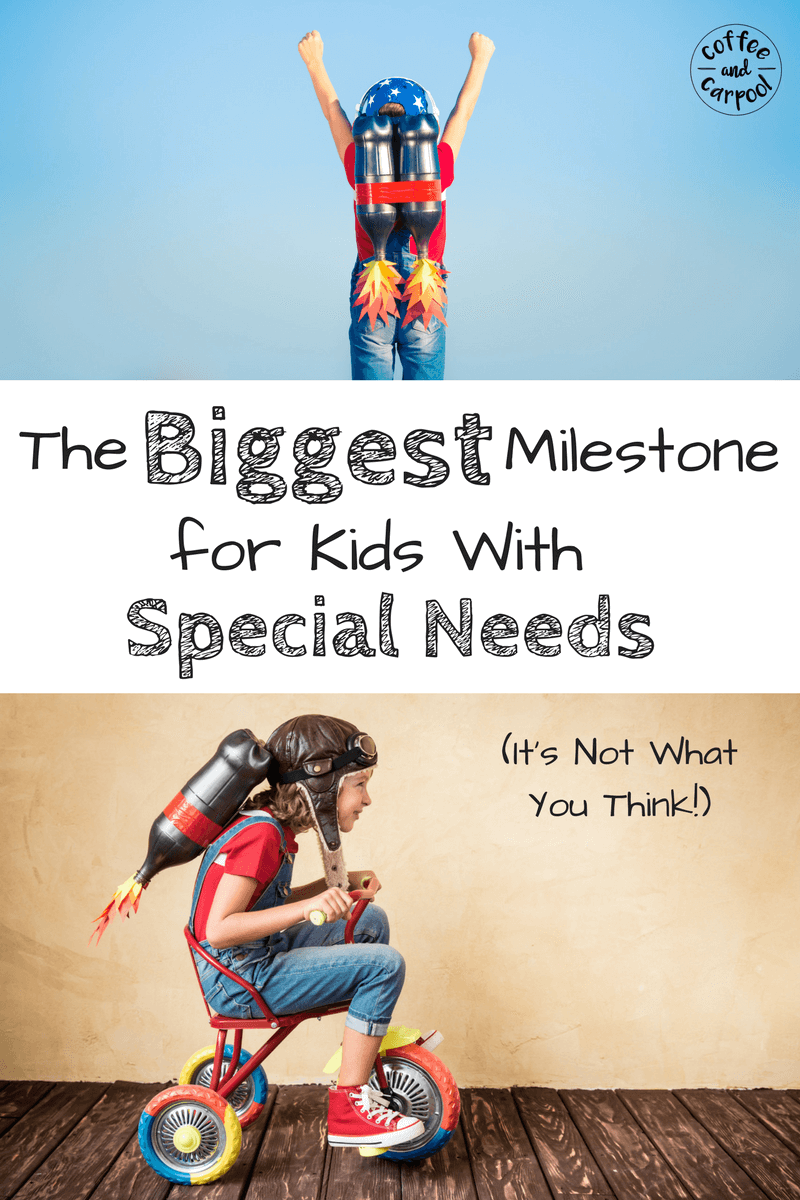 But for parents who have special needs kids, there is one kind of milestone that evokes the most pride. The most intense reaction.

Complete giddiness, sheer joy, and a huge fist pump into the air.

When your special needs child does the impossible, does the unthinkable and proves their doctors wrong, it’s a beautiful, magical day. A day that will put tears into your eyes and make you realize that every hardship and bad day was completely worth it.

It’s the moment they do something that their doctors swore they would never be able to do. A “normal” childhood milestone that will be just out of reach for your child’s abilities.

Addison has low vision and has severe depth perception issues. When she sees a line on the ground, she can’t tell if it’s a step up, a step down, or just a line. And because of that, she’s always had poor balance.

So we worked on her balance. We signed her up for gymnastics and even though little girls half her age were running circles around her, she persevered. It took four years of balance beam practice, but she could finally cross it. And as she matured and gained more body awareness, she fell down less and less.

It was slow progress, but it was progress.

But then she started third grade. And in third grade there’s a Bike Rodeo where every third grader gets to showcase their bike riding skills on a safety course. Her school told us we could opt out. We could easily have just been absent that day. Everyone would have understood.

But instead, we went for it. We practiced every day after school. We encouraged her and we cheered her on. And we told her she could do it.

Oh, there were still tip-overs and tears, but we kept at it.

And then one day, she did it.

Our daughter with special needs and low vision hit her biggest milestone.

One of her”you’ll never be able to do it” milestones.

Today, without training wheels on, she rode her bicycle by herself. With her dad running beside her, ready to break her fall, she did it. She stayed upright and had forward motion for 20 seconds. 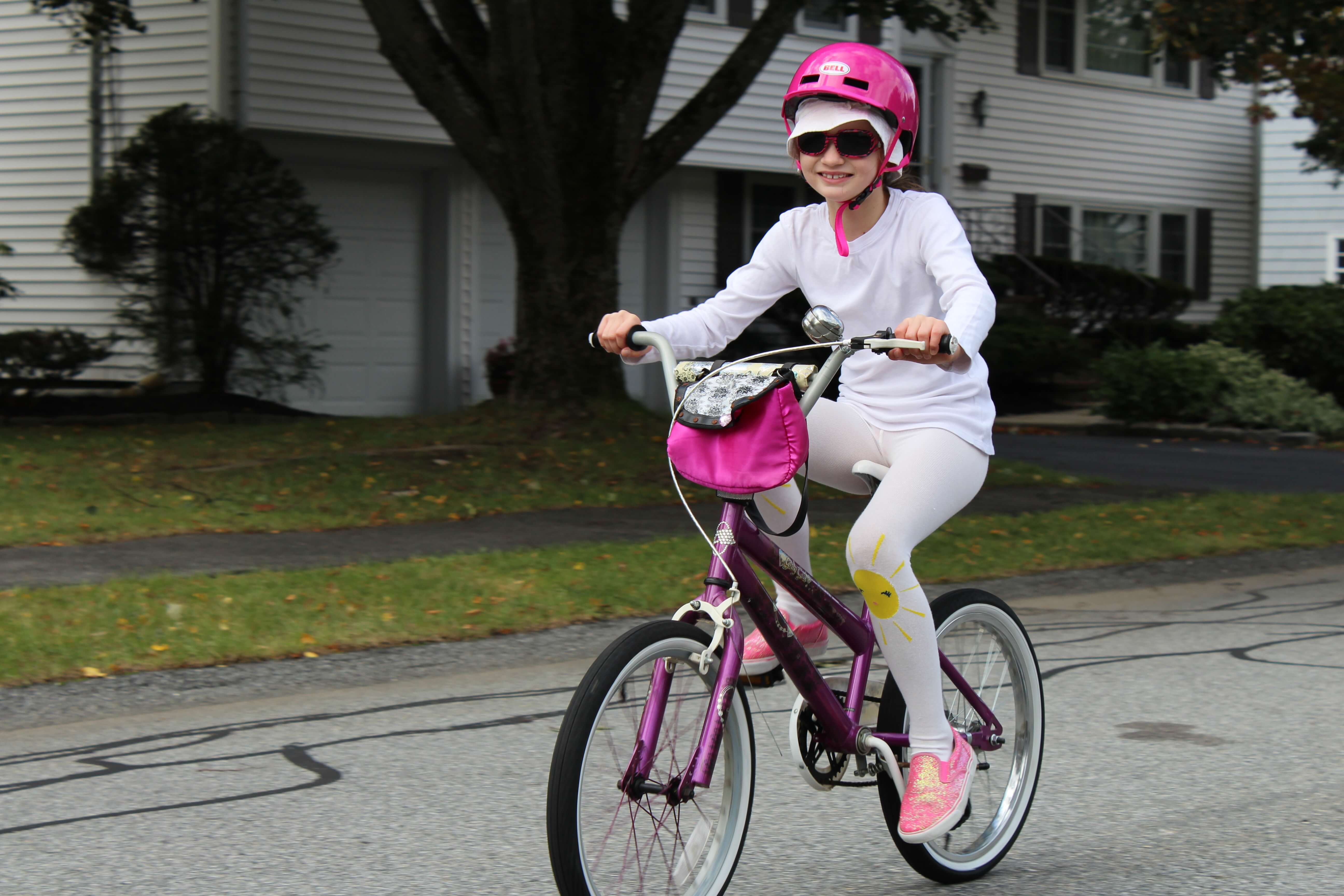 It was 20 seconds longer than her doctors predicted.

Because riding your big kid bike is a huge deal for every child. It’s a rite of passage. All parents should shout from the rooftops when their kid can ride a two-wheeler. It’s an incredible accomplishment.

It’s a sign of growing up and of independence. Because if they can ride away from you, one day it’ll be down the street, around the corner and off with their friends.

But for a kid who’s always been behind in her gross motor skills, who finds walking near curbs the most challenging part of her day, this was a momentous occasion.

It was made even more momentous because she believed she couldn’t do it for the longest time. The amount of “I can’ts” that came out of her mouth were numerous. Her doubt was high. Her fear of falling was projected by squeals and screams heard up and down the street.

But we believed enough for her.

We knew that if she just kept practicing, one day—maybe not any day soon, but one day— she would be able to do it.

So when she rode her bike, her look of surprise and then pride on her face was worth all the tears. She dismounted after her 20 seconds of amazingness and ran to me, beaming. And when she came close enough to see I was crying, she giggled and giggled as we spun in circles, with me giggling and crying at the same moment.

As I tucked her into bed that night she heard the words that she hears often from me:

“I’m so proud of you. You did it. You thought you couldn’t do it and you were scared, but you tried anyways. And you did it. What incredible bravery and perseverance. What determination you have.”

She beamed with pride and had one last question for me: “When can I learn how to drive?”

Was your child with special needs given a list of things they’d never be able to accomplish because of their disability?

Have they started crossing things off their list through sheer determination and will?

We use the power of “yet” to instill a “growth mindset” in our kids…you just can’t do it…YET. For more info on how to encourage our kids to keep trying, click here.

Is your special needs tween or child craving more independence? So was mine!