Inside: If you’ve got kids in sports, help them become a good teammate and have good sportsmanship. It’s way more important than teaching them how to win.

The game was in the bottom of the ninth, the winning run was on third base, itching to come in and score.

There were two outs and the count was 3-2.

This was it. The most stressful part of any baseball game, no matter what the stakes.

There was immense pressure on the batter to hit his teammate in.

And there was immense pressure on the pitcher to strike him out and end the game.

So the pitcher winds up, and the die is cast.

He strikes out the batter.

Now here’s the truly magical part and the reason this story went viral:

As the team that won ran to each other, whooping and hollering and cheering each other and jumping on top of each other in a dogpile, the pitcher ran the other way.

He ran to the hitter and embraced him.

With the craziness surrounding them and the crowd going wild, these two players took a minute in each other’s arms.

Because they were best friends.

Childhood best friends faced each other in the last pitch of the last inning of the last game to win or lose it all.

It would have been so easy for the pitcher to get swept up in all of the winning spirit and run off with his team.

But friends come first. And he knew it.

Sometimes, consoling your friend has to come before cheering for yourself.

And in that moment, that pitcher showed the world who he truly was: a compassionate, kind, and incredible teammate who was taught to value sportsmanship over winning.

And I want that for my son and my daughters.

I want them to learn more than the fundamentals of the sport they’re playing.

I want them to learn how to be a gracious loser.

And a gracious winner.

And how to be a good teammate. 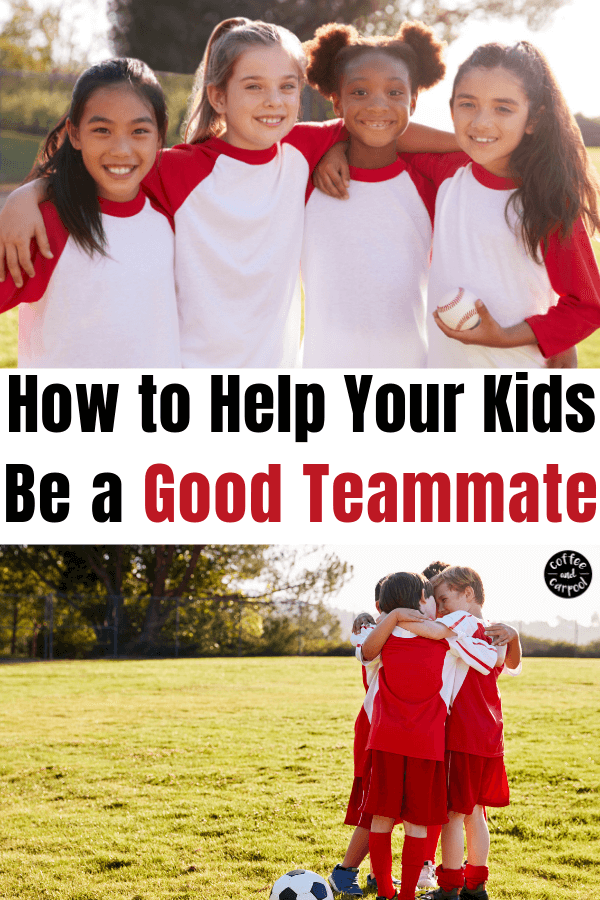 We are on purpose raising kind kids. It’s so important to us, it’s one of our only two family rules.

We model it, talk about it, and we expect it.

Related: How to Talk to Our Kids About Kindness…60 Kindness Discussion Starters

And that extends to the pitch, field, court, and ice rink.

When my child signs up to play a sport, I want him to do more than learn how to throw and how to shoot and how to score.

I want them to learn teamwork.

And how to be a good teammate.

Home runs and shots scored and touchdowns are fun.

But the thing that will last, the big takeaway we need for our kids to remember, is how to treat teammates who don’t score the point.

How to support a disheartened teammate who missed the shot.

And how to encourage the teammate who let the goal in to shake it off.

So kids who have insane skills and natural talent are always great additions to any team.

Because those are the kids who will inspire my kids to be a good teammate in return. 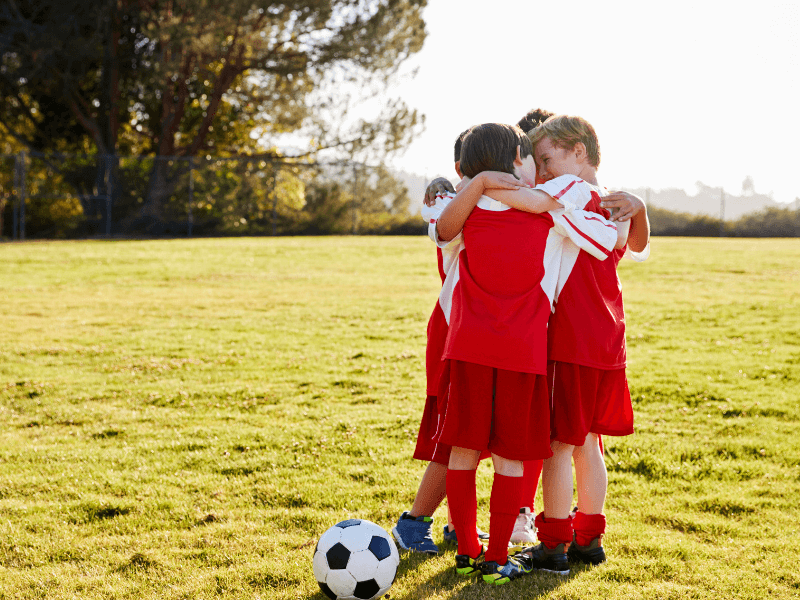 What characteristics make a good teammate?

The Positive Coaching Alliance has an exhaustive list, but here are a few key points parents need to know.

1. Good teammates are supportive and encouraging

At my son’s last baseball game, he was catching and his friend was up to bat on the opposing team. His friend got a hit, but got thrown out at first. As my son’s friend walked back to the dugout, head down, he passed by son.

My son reached out his glove to high five him and told him it was a great hit.

It’s easy to remember to cheer on a teammate when they do well or when you’re hoping they do well, like when they’re up to bat or on the free throw line.

But our kids need to remember to be supportive and encouraging when their teammates, (or their friends on the opposing team,) don’t perform with perfection.

My son has been on a team where this wasn’t the case and bad mouthing, blaming, and making fun of mistakes was commonplace.

Related: How to Raise a Kind Boy in Amidst the Tough Guy Sports Culture

It was disheartening to be a part of it, to be near it, and to be associated with it.

So our kids need to know that even if they’re disappointed a teammate didn’t score or hit or make the shot, their teammate feels way worse about it than them.

Our kids need to lift up their teammate and add value and attempt to make others feel better. 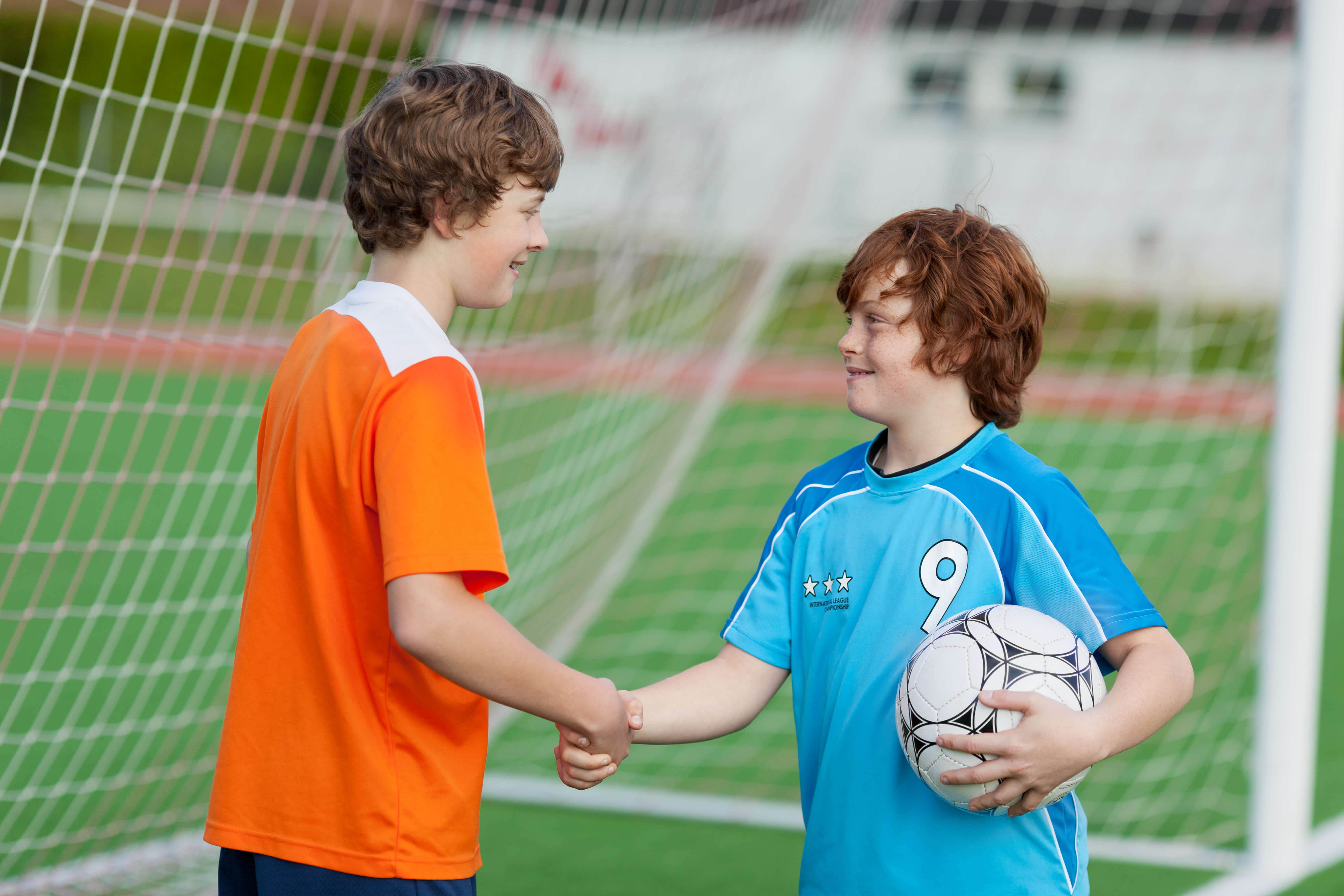 2. Teammates are teammates outside the practice and the games.

At one of my son’s first baseball practices, a boy on his team got hit in the face with a bat. It was scary and awful and we were all so worried about this little guy.

Later that night, we got an email from our coach reassuring us the player was okay. Then the coach gave us the mom’s phone number and told us he expected each of the boys to reach out personally and check on their teammate.

A call from a mom was not sufficient.

He wanted the boys to do it.

(Can I just say, I love his coach this year?)

Our kids need to know that being a good teammate doesn’t just happen at practice and at games.

Last fall when my son was playing soccer we had a rockstar on our team. He was incredible.

And last winter, when my son was playing basketball we had a different rockstar on our team. He was also incredible.

Which I get. It’s fun to score.

But the other boys on the team wanted to play too and that involves passing.

Luckily, a few other boys on each of the teams loved to pass. They knew if they passed, others would pass to them.

So they were generous.

When they knew a teammate hadn’t taken a shot in a while or had possession of the ball in the last few plays, they passed.

They generously gave up their turn to let another teammate shine.

And it came back to benefit everyone.

And eventually, it meant more shots on goal and more baskets in.

And those two rockstars? They started passing more too. The generosity of their teammates was contagious.

4. A good teammate hustles and gives it their all

I played volleyball in high school with a girl named Stephanie. When you look at Stephanie, you wouldn’t guess she was a volleyball player. She was probably 7 inches too short for the sport, especially at our school.

But she made up for it in how she hustled.

And she did it with a smile. She was happy to be there and wouldn’t use her height-or lack of height- to ever be an excuse.

She touched every ball even if she had to slide halfway across the court for it.

Her hustle was an inspiration to the rest of us.

It taught us to give it our all. Every practice. Every game.

To show up for our teammates.

Because if Stephanie was sprawled on the floor to save a ball, how could we not do the same for her?

Good teammates give it their all out of respect for their teammates.

5. A good teammate helps others

Kind kids are helpers. So it makes sense that a good teammate helps others too.

My daughter has never played team sports in her life. She has low vision and would never see a ball coming for her. So she stuck with gymnastics and karate and music.

But now she’s in middle school and that comes with P.E.

And when her P.E. coach told me they were going to start a softball unit, I almost died. How in the world would she be able to hit or catch a ball she couldn’t see coming at her?

But she’s on a team with a boy she’s known since kindergarten and he pitches to her. Before every pitch, he calls out, “Are you ready?”

And when she answers, he then tells her when he’s pitching it so she knows the ball is coming. (That boy is my hero. But that’s another story.)

And yesterday, after weeks of trying, she got her first hit and made it on base. My daughter can’t stop talking about it because it was a first for her. And there’s few things more satisfying in life than finally being able to do something that took you a long time to master.

But her hit was made possible because this boy took the time and the patience to help her succeed.

Help can look like so many different things in sports: 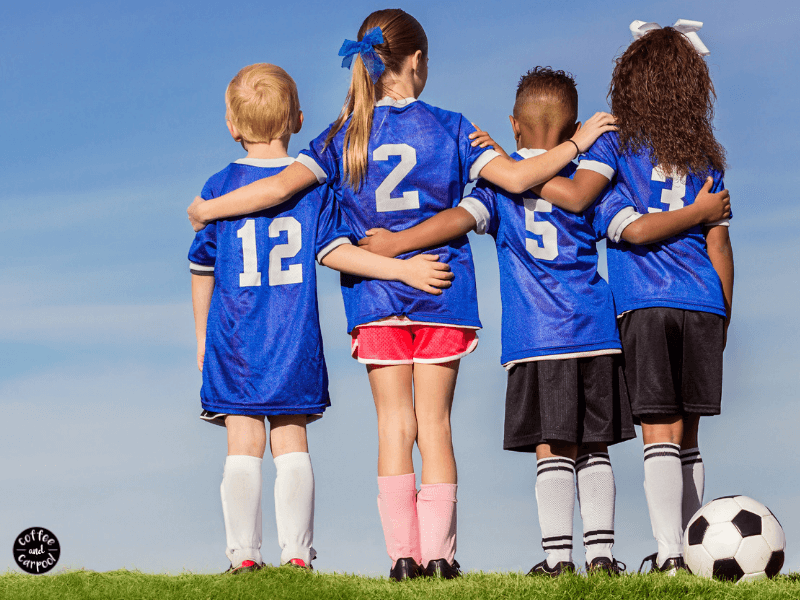 The other day, my son’s baseball team played against a team who was better than us.

They were winning, by a lot, but one close call was made in our favor. And a boy on the other team threw his helmet, kicked the dirt, and screamed through tears how unfair it was.

They had the skills. We had the heart.

And I choose kids who lose with grace any day over a team who wins without it.

Kids who are good sports:

But kids who get mad when they lose or “mess up” are missing the whole point of the game.

Kids have to know losing isn’t the end of the world. It’s not going to break them.

Losing is rarely, if ever, worth a tantrum.

So our kids need to learn how to lose without calling foul play or demanding it wasn’t fair or putting down the winners.

And more importantly, learning how to be a gracious winner without boasting about the win or putting down the other losers about the win is crucial.

When our kids are playing against a friend, the stakes to be a good sport are even higher.

Because our friend’s feelings are on the line.

Taking the time to console a best friend who lost, is way more important than the win.

Being a good friend will always be more valuable than a scoreboard.

Because being a good teammate is the win. 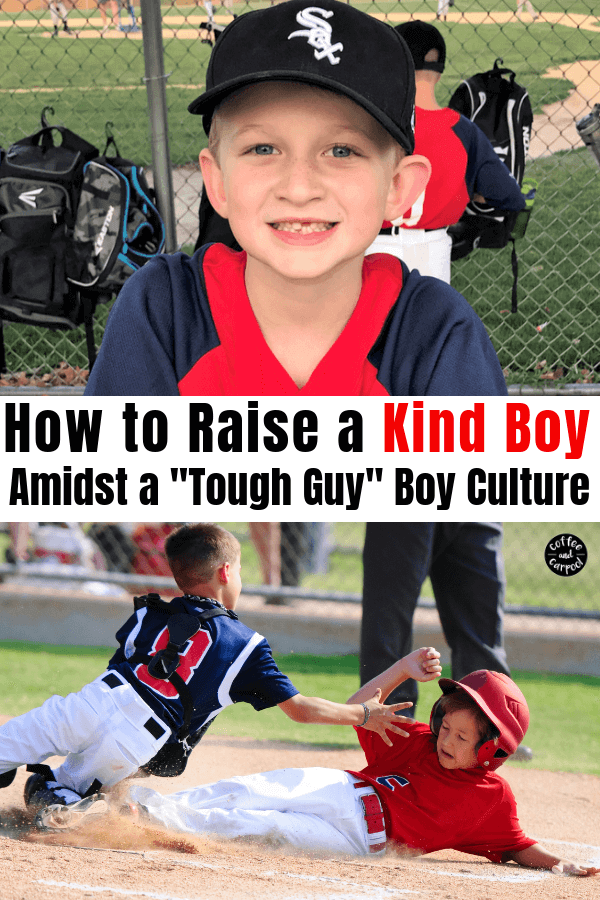