Inside: Help kids be kinder to themselves and avoid negative self-talk so many of our kids are saying to themselves.

This looks so horrible.

I was hanging out with my daughter and a bunch of tween girls and these were the words I heard come out of their mouths.

And my stomach dropped.

They were so unkind.

Their self-talk was simply cruel.

And it broke my heart.

Here was a group of amazing, smart, and talented girls whose self-worth was pretty much in the garbage.

And as an adult in their lives who overheard it, I had to put a stop to it.

I had to speak some positivity into them and tell them they are kind girls and they’re not allowed to speak about themselves in such a negative, harsh, and demeaning way.

I had to help them find happiness from within themselves.

Related: How to Help an Unhappy Child Be Happier

I had to encourage them to speak to themselves the way they would speak to a friend.

I had to remind them to be kinder to themselves and avoid negative self-talk. 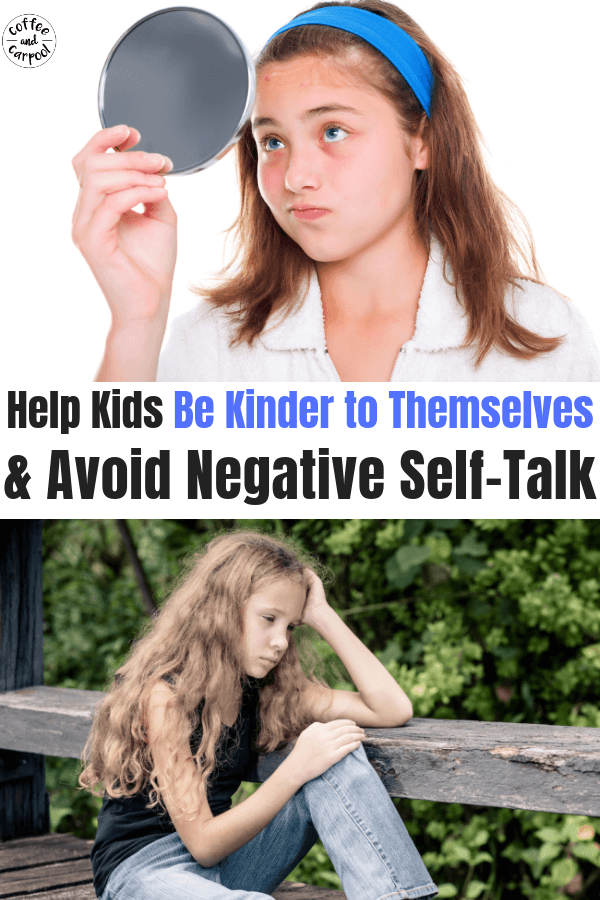 Why Kids Need to Be Kind to Themselves

Some kids are naturally harder on themselves when they make a mistake. I know I was. (ahem-still am).

I would berate myself. I would not let it go.

I would name call… to myself.

And as kids grow and morph into adults and try to figure out the social structure of fitting into their crowd of friends, the pressure is extra high to be perfect. Or to look perfect. Or to do perfect things.

But as our kids navigate the social constructs of playground rules and then try to avoid middle school and high school drama, we need to help them remember to be kinder to themselves.

To give themselves some grace.

To allow themselves to make mistakes and learn from them in healthy ways.

If we are on purpose and with intention raising kind kids, we need to make sure they’re not just being kind to their classmates and friends.

Related: What all parents need to know to raise kind kids.

We also need to make sure they’re being kind to themselves.

Because kids will believe what they hear. If they hear themselves saying these put-downs, they will start to believe them.

These words will become their truths.

And when they inevitably screw up again or make another mistake or don’t do something perfectly, they will have created a self-fulfilling prophecy. See? I was right. I knew it. I suck.

Unkind self-talk will become a vicious cycle which will negatively impact our kids’ mental health and their ability to come out of the other side of childhood as a confident person with their self-esteem intact.

How to Help Kids Be Kinder to Themselves:

Most of us teach our kids the Golden Rule. We talk about it so much, we have a poster with the words on it in our home: Do unto others as you would have them do unto you.

But for our kids who speak poorly of themselves, we need to flip it. We need to remind them they are not allowed to say things to themselves they wouldn’t say to a friend.

So we focus on the Backwards Golden Rule too: Don’t say anything to yourself you wouldn’t say to a friend.

We have to remind them they are kind. But they are forgetting to be kind to themselves.

Related: How to Raise Kind Kids

2. Ban the Name Calling and Putdowns

We don’t allow our kids to call each other “stupid” or “dumb” or make fun of each other. Teasing, name-calling and putdowns are banned in our home because they’re unkind. End of story.

Related: 15 Surprising Things we Ban to Raise Kinder Kids (name calling and teasing are on the list!)

So why would those rules be any different when our kids use those words on themselves?

If my daughter can’t call her brother “stupid,” or call a teammate a “loser,” she also can not call herself “stupid” or a “loser.”

4. Challenge them to flip the negative self talk to the positive self-talk.

Kids who speak negatively about themselves often don’t know what else to say.

They don’t know they can want to get better at something without being mean to themselves.

But with a little practice and guidance, they can do it.

We need to help them make this simple but powerful switch. 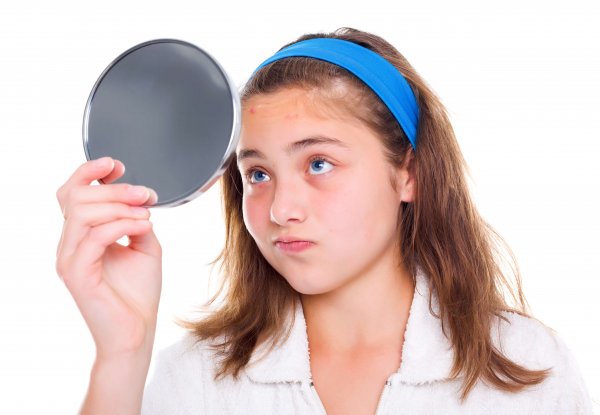 5. Encourage Them to Say Three Things They Love About Themselves

We often have our kids write down three things they’re grateful for to help them focus on gratitude.

But the same concept will work for being grateful for themselves.

When they point out, showcase, and take the time to value the skills or attributes they like or love about themselves, they’ll start to see why they’re amazing. They’ll start to remember they’re actually pretty awesome.

And the negative self-talk will slowly take up less room in their heads.

They can say the three things out loud each night or they can write them down in a journal every night like one of these.

Kids who struggle to think of positive things to say about themselves will need some guidance so they know how to replace the talk with something less negative.

Stuart Smalley on Saturday Night Live had it spot on all those years ago: “I’m good enough. I’m smart enough. And doggone it, people like me.”

Affirmations for our kids can be simple: I am kind. I have a kind heart. I work hard.  I am smart. I am good at math. I am an artist. 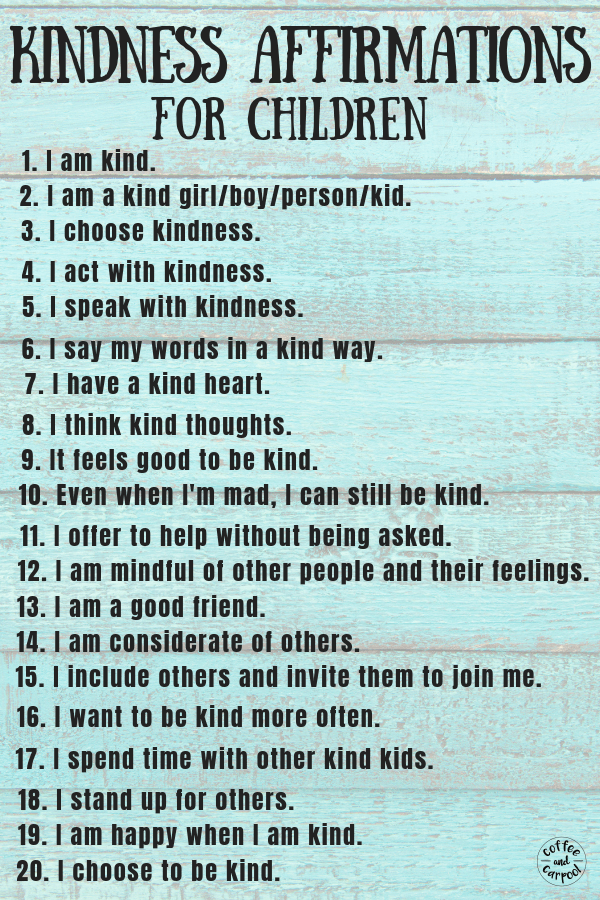 Want to print out these kindness affirmations out and hang it up on your fridge or bathroom or in your car? You can get it here.

If you need something broader than just kindness affirmations, these Affirmations for Children from Lemonade Brain are some of the best I’ve seen.

Once you have the words that will work for your child, write them on cards. Say them every morning. Say them as they head off to school or a friend’s house. Say them as you tuck them at night.

Put the positive words in their head so they will have a wider choice to chose from when they need to say something about themselves.

7. Help them Deal with Mistakes

Mistakes are a part of life. We all make them. In fact, I remind my middle schooler that the whole point of middle school is to make mistakes and learn from them before she gets to high school, college, and adult life.

But the trick with mistakes is learning from them. Our kids need practice fixing their mistake, apologizing if necessary, and then moving on. Often times, it’s the moving on that’s the hardest part.

That and remembering not to make the same mistake over and over again.

But our kids need to know we don’t expect perfection from them. We don’t need or want perfect kids because that’s not realistic.

We want kids who strive to get better each day. Kids who want to be the best versions of themselves.

And when they know that, they’ll be less hard on themselves when they make a mistake.

8. Help them Build a Growth Mindset

Kids struggle with negative self-talk when they realize they’re not good at something.

They try to draw a person or try to dunk the basketball or they’re singing the lyrics to a new song.

Kids who have a growth mindset know they just can’t do it yet. The “power of yet” is a great skill to teach our kids because it gives them the power of knowing even if they can’t do what they want to do, that doesn’t mean they’ll never be able to.

They will persevere, keep trying, and get the help they need to achieve their goals.

Related: How to Raise Kids with a Growth Mindset

The current parenting shift is helping kids find their own self-worth and value without depending on outside praise.

And the concept is fantastic.

My kids are more intrinsically motivated when I limit the number of times I tell them “good job” and instead say, “You worked really hard on that. You must be proud of yourself.”

But, with that being said, we can’t be extreme with it. My kids also need to hear from me that I am in fact proud of them.

And other days, I straight up tell them what I think: “You. Are. Beautiful. I am proud of you. You worked really hard on math and you’re getting better every day.”

A healthy balance of the two is important. Especially for kids whose instinct is negative self-talk. 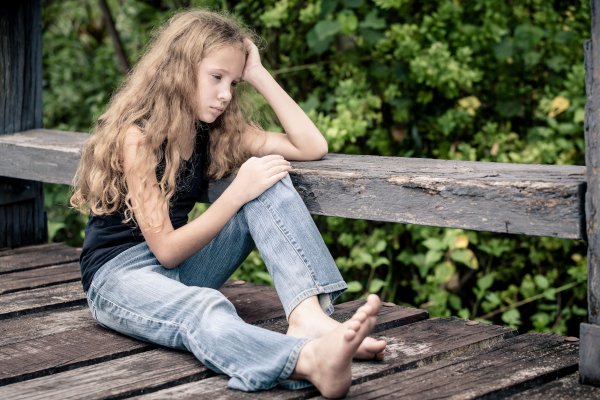 We can all admit it. Sometimes we’re not as kind to ourselves as we should be.

But our kids are watching us. They’re hearing everything we say. Even if we say it under our breath.

Are you being kind to yourself?

Do you need to remember the Backwards Golden Rule for yourself?

I know somedays I do. Because we could all be kinder to ourselves. We could all use a little more grace.

And we could all use more positive self-talk.

So say it with me and Stuart Smalley from Saturday Night Live: “I’m good enough. I’m smart enough. And doggone, people like me.” 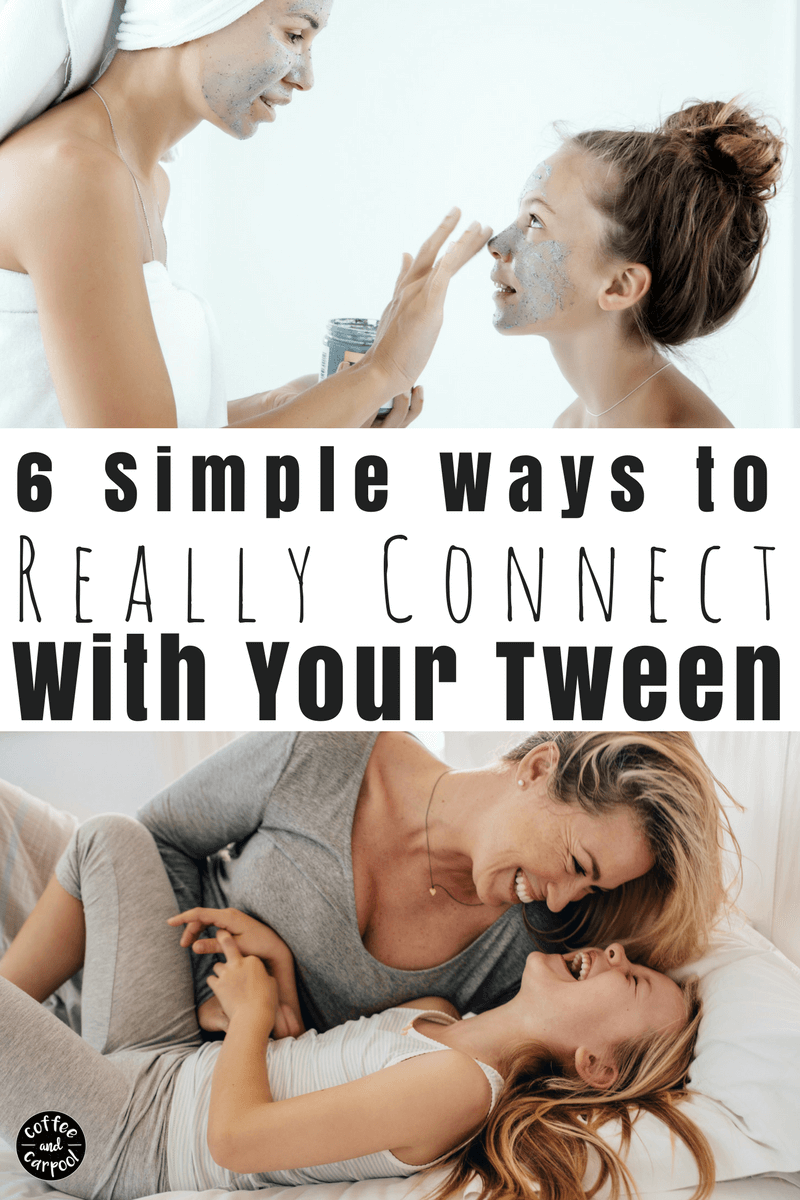