Inside: There are several dangers of telling secrets. But we can teach our kids these strategies instead they stay safe and stay kind.

My daughter was outside playing with some friends when two of them were huddled in the corner, whispering secrets into each other’s ears.

“Let me tell you a secret.”

And the third child, excluded, walked away with their head down.

Turns out, the big secret was about a dog they saw.

It wasn’t some secretive thing at all.

But the damage to the relationship had been done.

With one whisper, one secretive moment, there was an “in” crowd and an “out” person.

There were people included and someone excluded.

So in our family, we don’t do secrets.

Yes, of course, we keep confidences and listen to each other without needing to repeat it.

And we don’t ruin surprises for birthdays and holidays.

But secrets can be devastatingly dangerous and can cause real hurt in relationships. Here’s what to do instead. 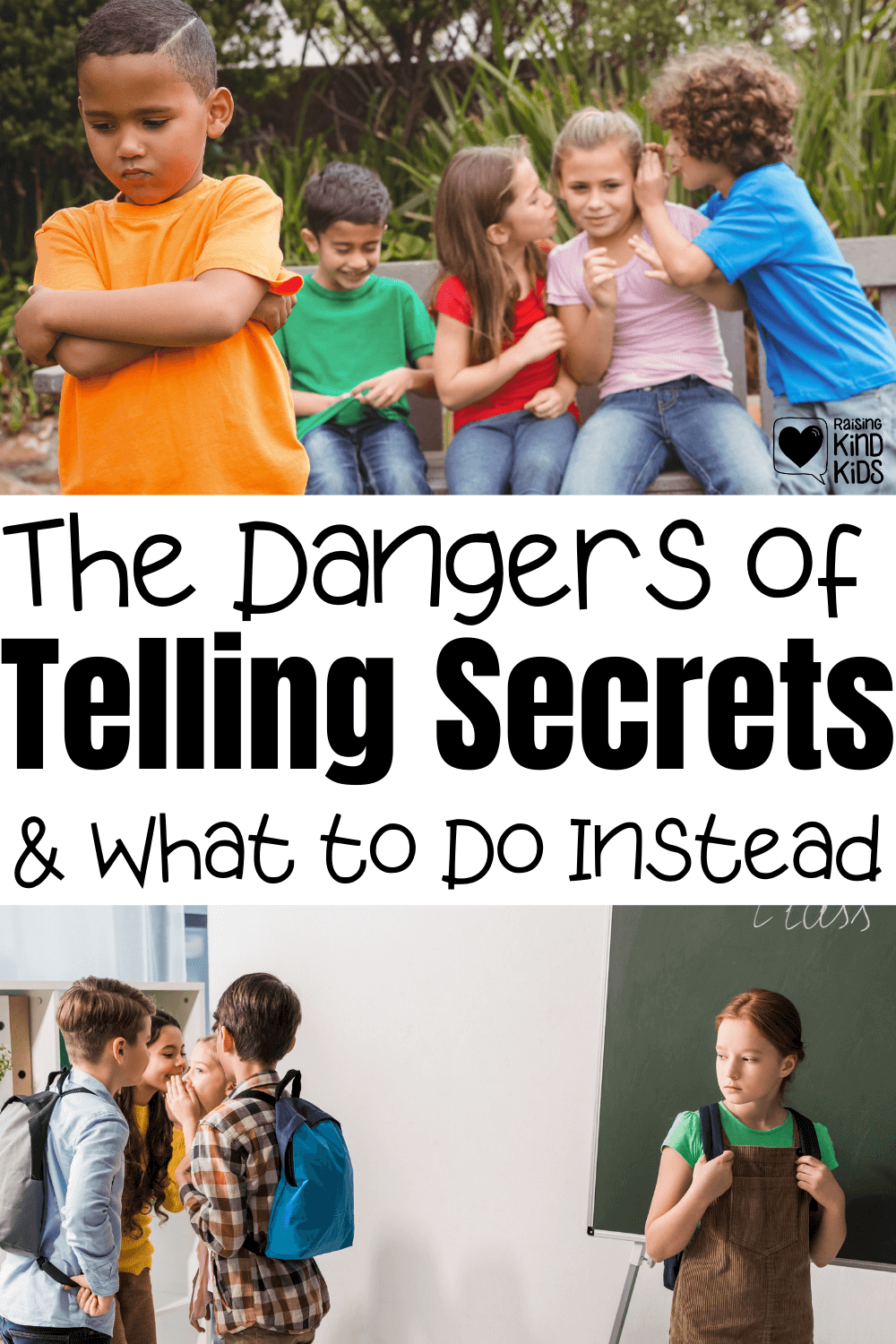 Why Secrets are Unkind

We are raising our kids to be kind. It’s so important to us, it’s one of our only two family rules.

And part of being kind is making sure to be an includer, to welcome others to join in.

We ask them to invite other kids to play, and invite kids to sit with them, and to include them in the group.

When we tell secrets in front of other people or whisper while others are near us, we’re immediately excluding people, even if we don’t mean to.

We’re drawing an invisible line between “us” and “them.”

The people not party to the secret might assume or wonder or worry that the secret is about them:  They must be talking about me because why else would it need to be a secret? What do they know I can’t know? Are they talking about me?

And on top of the worry and anxiety about the topic of the secret, the kid or kids on the outskirts of the secret are excluded and isolated and left out of the story or the joke, even if the secret is only about a dog.

Which is one of the loneliest things to feel, whether you’re a child or an adult. 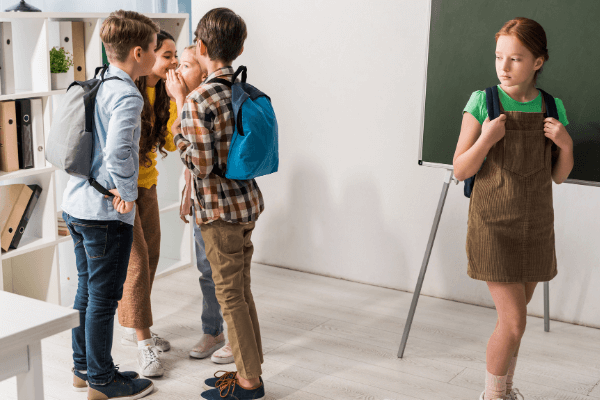 Why Secrets Can Be Dangerous

I’m so sorry. We’re going to get super dark and serious for a second. We’ve got to talk about things parents hate to talk about let alone think about.

**Trigger Warning for this section: sexual assault/abuse and suicide

My 13-year-old daughter was told a secret. Her friend was thinking about suicide but my daughter wasn’t supposed to tell anyone.

Thank goodness my daughter knew the difference between tattling and telling and knew secrets like this are not secrets to keep and told me. We were able to reach her parents and her friend got the help she needed before she hurt herself.

We have to teach our kids that secrets that are about someone getting hurt or about to get hurt aren’t secrets. They have to tell a trusted adult and get help.

Likewise, I had a friend who was sexually abused by her neighbor when she was little. He told her it was “their little secret.” He told her not to tell anyone. He told her if she shared the secret her family would get hurt.

Luckily, she knew to tell her mom and it never happened again because he went to jail.

We have to teach our kids that when an adult tells them to keep a secret from us, that’s never a secret to keep. They can always tell us anything and we’ll believe them. (And if they tell us, nothing bad will happen to them or to us, even if that was the promised threat). 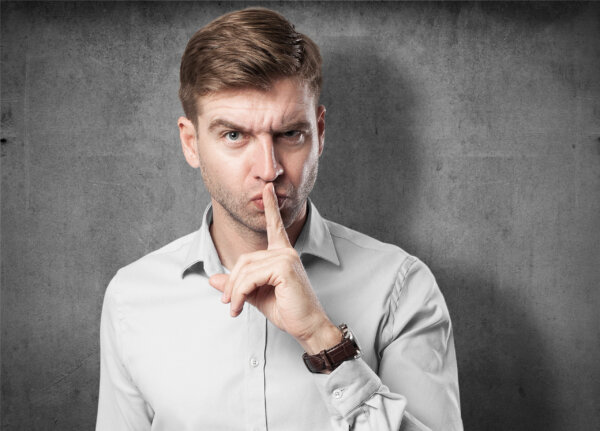 What to Teach our Kids Instead of Secrets

Of course, there are instances where we want to keep our kids’ confidences.

We want them to have friends and relationships where they feel comfortable sharing private information or information that is sensitive.

But imagine a girls’  night out and you have something important you want to share with a friend. Would you whisper it to her while you’re all sitting around having a group conversation? Or would you wait until it was just you two so you could privately share your information?

As adults, we tell them privately, when we’re alone.

And we ask them to keep it between us or to not share the information with anyone because we want it to stay private and we knew we could trust them as our confidant.

But this is learned behavior. We’ve had to learn to be considerate of other people’s feelings and polite social norms.

Kids will often just lean over and whisper something to a friend, or to us, even if they’re in the middle of a group.

So we need to teach our kids to share those moments in private, when others aren’t watching us lean over and whisper and giggle.

If one of my kids wants to tell me something they don’t want their siblings to hear, they chat with me when I tuck them in at night or they pull me aside when their siblings aren’t in the room.

If they forget and start to whisper something important to me, I ask them if they can tell me later when it’s just us two together.

This helps avoid unnecessary sibling rivalry and jealousy when siblings see the secret being delivered and feel left out.

I want my children to tell me their private thoughts and what they’re worried about and who they have a crush on when they’re older.

As long as their private information isn’t about anyone getting hurt or anyone who is about to get hurt, I will keep their confidence.

And my kids know it. 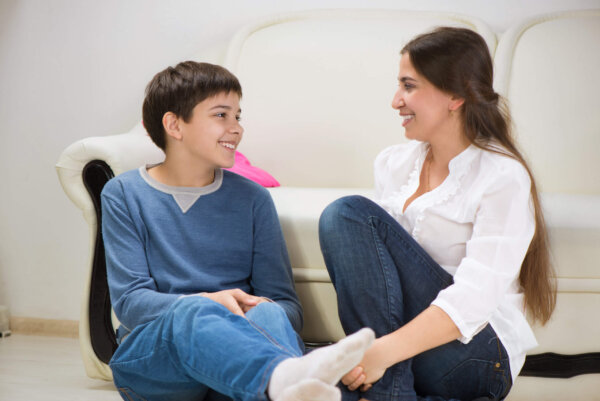 There are also times when the birthday person or the person receiving a special gift or surprise party has to be kept out of the loop.

In those cases, if they see the whispers or the shut doors, we remind them it’s a birthday surprise or a holiday surprise and they get to know everything soon.

But again, it’s best to avoid the whispers and the secretive actions when they’re around so they don’t feel left out as they wait for their surprise because knowing you’re the only one not in the know, even if it’s a good surprise, can still feel awful.

My youngest asked for new bedroom decor for her birthday and we asked her if she wanted to help paint and decorate or if she wanted it to be a surprise.

She said she wanted it to be a surprise, so we got to work.

We enlisted the help of her brother and her sister, but all of us in there working together behind closed doors was too much for her. Her birthday surprise was falling flat because she was left out and isolated and honestly, pretty sad about it.

She was on one side of the door and we were on the other.

She was on one side of the “secret” and we were on the other.

And she felt awful, even though she knew it was a good surprise. So, we asked her if she’d like to take a peek and get a glimpse of her birthday surprise before we were done.

But more importantly, we stopped working on her room altogether behind closed doors when she was right there with the door shut in her face.

Instead, we worked on it late at night when she was asleep in her sister’s room or when she was distracted by a movie or playing with her siblings.

Because secrets, even if they’re “good secrets” like newly decorated bedrooms, can be hurtful.

There are much better, less isolating ways to share personal stories, keep surprises, and talk about dogs than with whispered secrets. 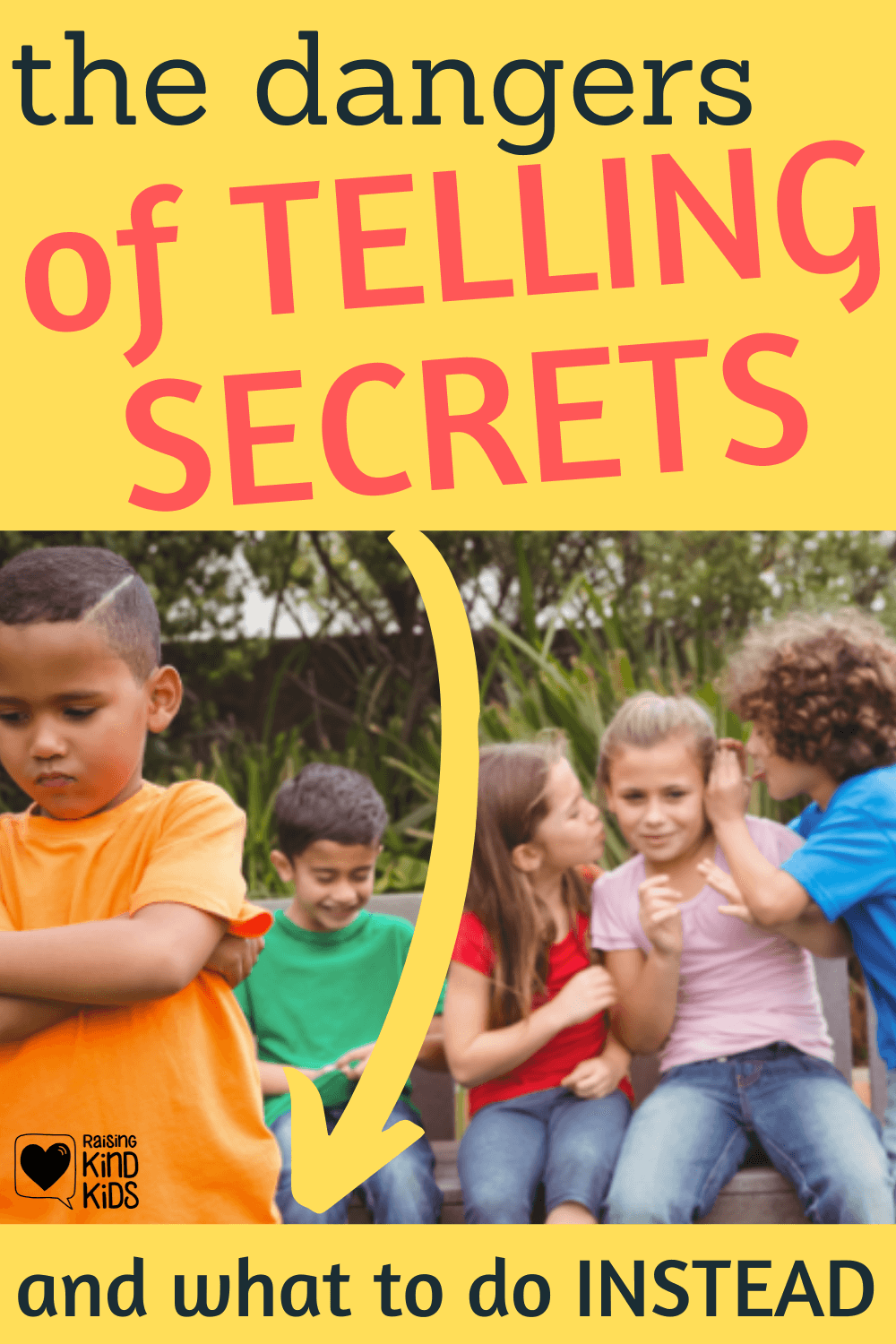 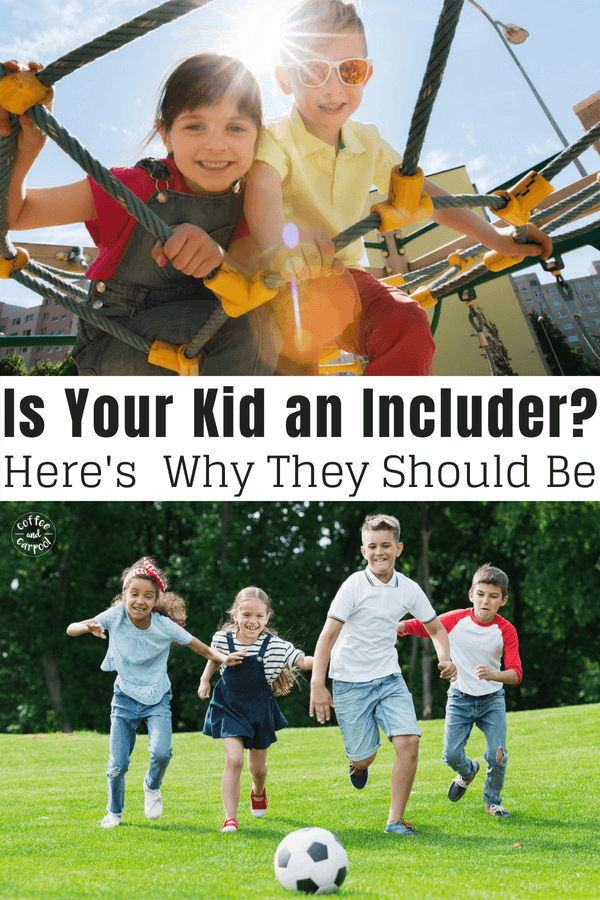